Articles > Reflections from the IXth Colloquium: The humanity of birds 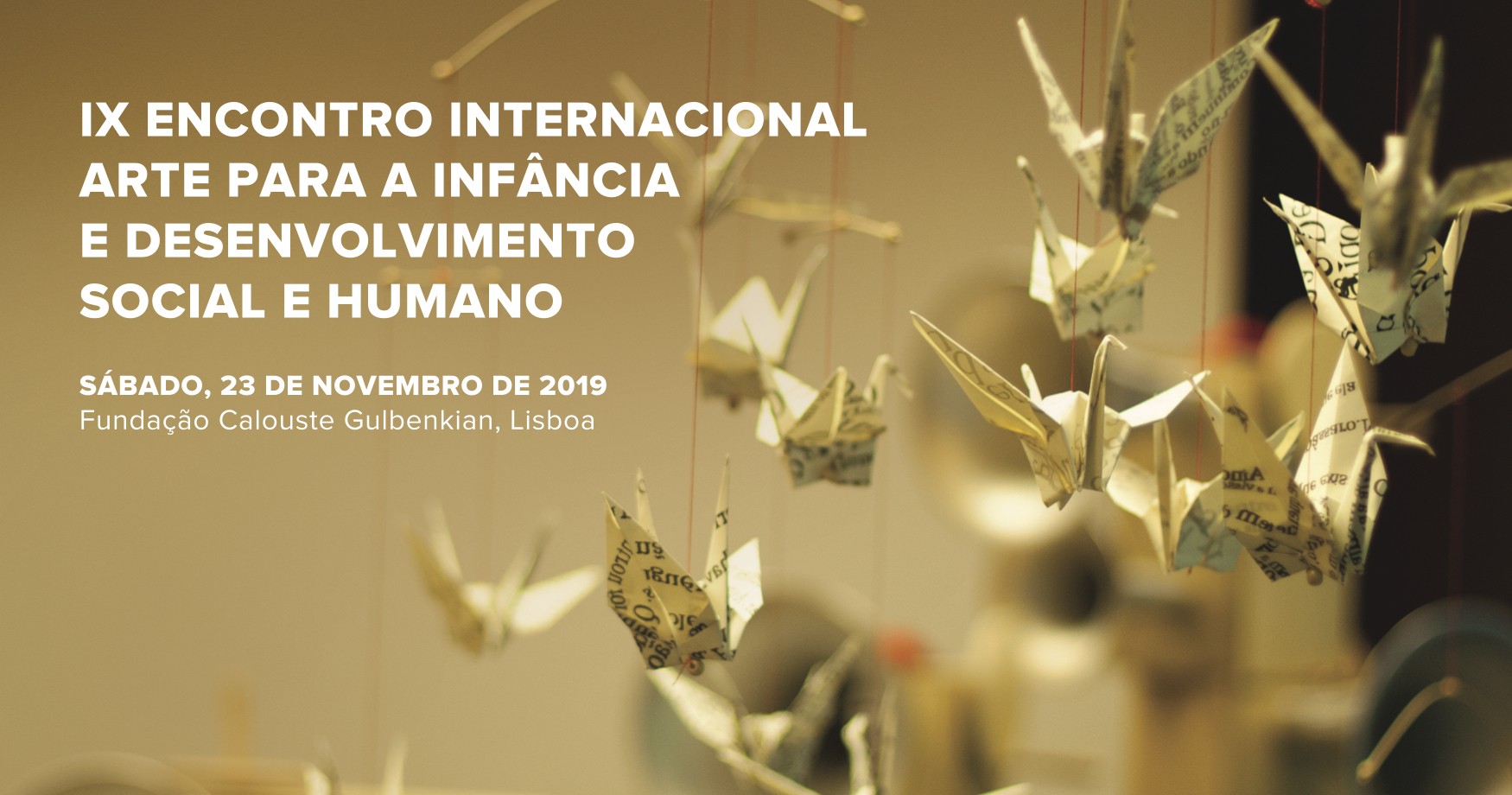 The IXth International Colloquium on Arts For Childhood and Social and Human Development took place in November 2019. It brought together different voices from around the world to explore the idea that music enables us to dive into our existing capabilities.

It was a time for celebrations: two of the main partners of the International Colloquium on Arts For Childhood and Social and Human Development had birthdays this year. Companhia de Música Teatral celebrated two decades of work, while LAMCI (Laboratory of Music and Communication in Childhood), which is part of CESEM (Center for Studies in Sociology and Musical Aesthetics), celebrated its ten-year anniversary. And, as this was the ninth Consortium, we anticipated our own tenth birthday next year. In all our projects over the years – and when we look at them side by side, we can see just how numerous they are – the figure of Edwin Gordon “has been fundamental”, as Helena Rodrigues said at the beginning of a morning that prefaced a day full of surprises, going on to say: “We are having a great birthday party.”

As usual, we invited guests, and our guests invited us to think. That’s what Joanne Rutkowski did as soon as she took the stage and started sharing her story. Opening her personal box of secrets, the emeritus professor of Music Education at Pennsylvania State University, whose research focuses on how children sing, told us “how it all started”; to do so she had to turn around and look back. Through this action she saw how, in the past as a young music teacher, she would have dealt with children from 3 to 5 years old in the context of a ‘class’. “Who was I?” asked Joanne, showing a video of herself singing a children’s song and urging children to imitate it. In 2001, a gap year allowed her to explore other practices and look again at what she was doing. She read Edwin Gordon and observed other teachers and the way they taught. And she changed her point of view: in a video from 2006, she appears in a large circle of adults and kids, all sitting on the floor. Children enter “a musical space” in which no one leads or speaks — they just sing.

“What did I learn?” asks Joanne. “I learned to see how children learn a language”, she said. And the way a language develops is no different from the way music enters – or is already present – in our lives. It is a sure comparison, though there is not always an equivalent approach to both language and music. A language is learned in an immersive and rich environment, where interaction with others and ‘stuttering’ (trying out the language) before speaking are crucial. Only after these phases do we begin to speak with meaning, to refine our syntax and grammar. From her perspective, although music also requires immersion and the experience of a diverse vocabulary of sounds – “music is an environment, we don’t spend a day without listening to music”, said Joanne – it is rare to interact with children musically, as it is rare to let them ‘stutter’ without correcting them. Often, spoken vocabulary invades the musical lexicon and imitations take the place of improvisation. “Communicating through music is not just making others repeat what we say.”

Over the years, Joanne realized that, in the beginning, the set of rules she was following were out of place. In short, she thought that to learn, children had to participate in activities, had to wait for certain answers, should follow guidelines, have discipline and concentration. In the same way, she felt that, as a teacher, she should serve as a model, present them with a simple “musical” repertoire that they could sing and stand in front of the class. The new discoveries turned her world upside down: not only do children learn even if they do not participate, but it is necessary to give them a wide variety of repertoire from which complexity is not excluded at all. “I realized that I am a partner in musical interactions, that communication can be non-verbal. I pay attention to their contributions, but I don’t correct them. And I am part of the group,” she said today.

She also defended the idea that the teacher is a facilitator of natural musical development and not an instructor. Immersing children in a musical environment is all you have to do. It is not the teacher but the child who needs to be heard. And it takes silence for a child to respond with their own music. The transition from informal learning to a more formal style “is a process”, which is not necessarily chronological, and which is dependent on each child’s development, because “their chronological age may not be their musical age”. Often, said Joanne, we do everything too quickly.

Each of us realizes our own journey. Ana Isabel Pereira, who recently received a doctorate in Music Sciences in Music Teaching and Psychology, came to the IXth Colloquium to offer “personal reflections”. She spoke of her journey to understand music in childhood, part of which was a course on applying the theories of Edwin Gordon, a summer school of the Universidade Nova de Lisboa, and her close collaboration with Companhia de Música Teatral. She also spoke about “Música de Colo” sessions held at the Laboratório de Música e Comunicação na Infância and the transitive developments she experienced in the GermInArte project that led her to walk around the country and which, she said, reached more than 30 organisations and 700 trainees.

Professor of Music Education, and director of the Center for Childhood Music Development at the University of South Carolina, in the United States, Wendy Valerio gave a presentation entitled “From the classwomb to the classroom and beyond”. As a disciple of and collaborator with Edwin Gordon, and one of the authors of the book Music Play, she spoke about the three moments that make up human musicality: aptitude, acquisition and ‘hearing’ – musical listening and understanding. “Humans were designed to make music,” she said, explaining that the sense of the ear “is fully functional at five months, inside the womb.”

Wendy talked about teaching music and the conclusions she reached through decades of experience. And she shared with the audience her conviction that “you can’t teach anything, you just need to stimulate and give the opportunity to listen”. The most important thing is to encourage interaction and understand the relevance of silence as a musical purpose in itself (don’t we all continue to sing inside?). So how do we get children to musically interact with each other? “Before we are born, we are all musicians. Listening is a musician’s most important job. All sounds provide opportunities for musical and social interaction”, she said. And only fear – the fear of ‘music’ – can hold us back.

“About babies and birds… and baby birds” – this was the suggestive title of the presentation by Maya Gratier, professor of Developmental Psychology at the University of Paris Nanterre, who has been developing research on the relationship between the emergence of singing in birds and vocal learning in human babies. And she has concluded that there are parallels between the two. For five years she has been working with ethologists to understand the various stages of these parallel developmental processes, recording birds and human babies and studying the results. Maya established the chronological milestones of perception that have historically been sensed in both these and other developmental processes. Accordingly, in 1900, the baby was seen as a passive and confused being, while animal behavior was believed to be purely instinctive. By 1970, babies were known to have the ability to process information, and animals were recognized as responding to stimuli. By 2019, the perspective had totally changed: babies were understood as sensitive and thinking beings, and animals as cognitive and sensitive beings.

Some singing birds take 90 days to learn to sing; babies take 12 months to say the first words. Both go through a “phase in which they do not produce the sound of the species, but are processing and organizing it”. The way humans arrive at language is through music, so there are stages of vocal development ranging from crying (the emission of protosons or sounds with harmonics in response to adults) and babbling (the production of syllables and vowels together, the recognition of words), when speaking the first words, followed by an explosion of the lexicon and the elaboration of first sentences. How can a human baby and a bird learn to produce sounds that lead them to communicate, asked Maya Gratier. Her answer? Through exposure, imitation, random practice and socially guided interaction. “Babies are born attentive. They look and hear. And they recognize sounds they heard in the womb. They are equipped for communication from birth,” she said. Birds, on the other hand, are known to hear sounds from outside the egg. And the parents themselves emit specific sounds in front of them. Baby birds who have not heard these sounds develop different sounds – “they do not develop sounds that are typical of the species”.

The last session of the IX Colloquium covered work by Voarte, by the dancer Ana Rita Barata and the director Pedro Sena Nunes, on the role of dance and cinema in human development from the perspective of inclusion. Having undertaken several projects in their 20 years of existence, Voarte “seeks paths of diversity and new methods of exploring artistic languages”. One of the initiatives they carried out was called “Geração Soma”, an inclusive social project that worked with children with special needs in public schools, which resulted in the multidisciplinary performance “Eu Maior”, based on the maxim that “children are stars and their weaknesses become superpowers”. Building on this, the aim was to reconfigure the classroom, messing up the space and making the body move in it, creating an acronym from three words with which each child could describe themselves. “The idea was to discover a child’s fragility and potential”, said the artists.

What else does art talk about anyway? Paulo Maria Rodrigues presented the project “Mil Pássaros, Mil Lugar” and its different phases: an initial training session to introduce the musical material “that children will be able to see”, with a manual that teaches how a process of interaction with parents can be triggered; an installation in schools, with a hanging bird foot made in origami by children; a play entitled Orizuro; a Conference of  Birds; PaPI-Opus 8; and an installation entitled Inumera Mão. He also spoke about the most recent project by Companhia de Música Teatral: Murmuratorium (a title that refers to “murmuring”, evoking the way some flocks of birds fly and the sound they make). Working with a local group of children and teenagers (the project has already been carried out in Aveiro and the Azores), Murmuratorium is set up over a week with the participation of children and teenagers in an educational process that culminates in an installation and performances aimed at the general public.

The future, says Paulo, is “to make sure the birds continue to exist”. And, with this in mind, we need to make use of the unique technology development in the world today to generate the next generation of birds: the cyber-bird, “a possibility full of advantages”, for which there is already a prototype. Didn’t Steve Bannon say that thawing is a business opportunity? So we go. We walked the path. At the end of the IXth Colloquium, a soprano and a cyber-bird attempted the impossible.