Articles > Reflections on the Xth Colloquium

Holding hands, using objects as extensions of the body, having a palette of bright colours on the table, looking at each other, imitating, relating, laughing, singing lullabies, creating a ritual with a song at the beginning and at the end of the gathering… I believe that all these are gestures—human gestures that can’t be replicated by artificial intelligence (what algorithm is capable of reproducing love?)—whose purpose is to rescue the maternal voice, lost in us and from us, since the moment we were separated from the mother’s womb.

Isn’t life, from birth to death, an endless search for the voice that we feel when still inside our mothers’ wombs? Isn’t the absence of that voice ‘Saudade’ itself, a feeling of yearning that orients our thoughts, words and actions towards re-connection, not with the mother but with the Mother, the “nothing that is everything” (to use one of Fernando Pessoa’s expressions, later used by Agostinho da Silva) that connects and permeates everything?

And finally, isn’t music the manifestation par excellence of these same thoughts, words and actions, which in a magical and alchemical way transubstantiates “Saudade em Saúde” (foundational words [which roughly translate as “yearning into health”], presented by Paulo Borges in his book “Da Saudade como Via de Libertação”), so all the premature babies in this world can develop with quality of life and cooperate with each other to build a more harmonious world? Long live art! Long live creative production! For the Egg is not utopia — its non-place is at a feast that, inside us, is given to us there and forever.

“The temple bell fades —
the scent of flowers echoes
throughout the evening!”
(Matsuo Bashō)

Poetry… With roots in the Latin “poesis” and the Greek “poíesis”, the etymological meaning of poetry is to create or to do… Or to do something in a creative way. And I believe this is what the second part of the meeting gave us: the message that it is essential and increasingly important to live with each other in a constructive and creative way, which the language of antiquity describes as poetic living. And this was seen in the film “Murmuratorium”, a poem whose ways and whispers are centred on a symbiosis with Mother Nature, where the Poet, through the art of movement, dance, dreams, the Dali-like surrealism of curvilinear time coming from a giant sound centipede, or through the heavenly voices connected to earth by a cello string, is released, like the birds, held in our arms, that tear apart the heavens that encircle nothing.

According to quantum entanglement theory, two particles in different constellations can be connected, so that everything that happens to one happens to the other. And this was also seen in the synchronised flapping of wings created from the hands of hundreds of bird-people who, scattered at various points in the universe—from Portugal (from north to south to the islands), passing through Norway to Brazil—sang in a single voice:

“Water runs
The whole river runs to find the Sea.” 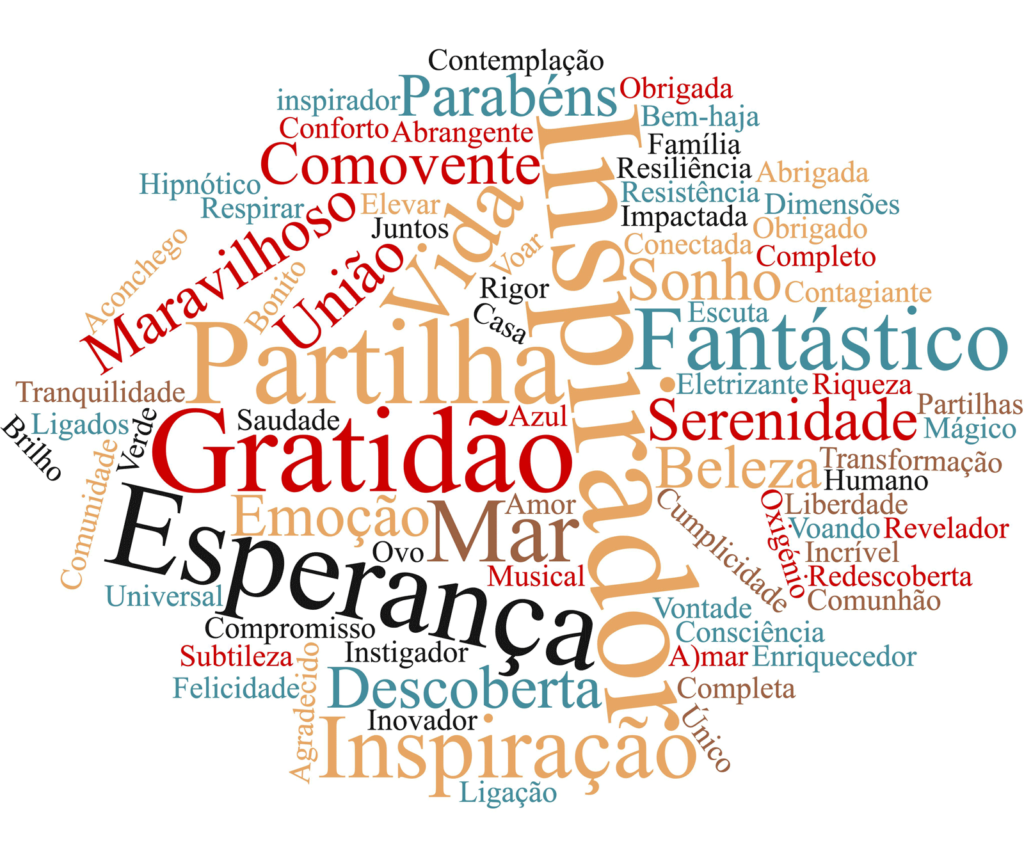